Abstract
Recently, ZnxZr1–xO2–x catalysts have attracted attention as next-generation CO2-to-methanol hydrogenation catalysts. In this study, we examined the effect of the Zn content on CO2-to-methanol hydrogenation over ZnxZr1–xO2–x catalysts and determined the active-site structure through both calculations and experiments. When the Zn content was low, ZnxZr1–xO2–x contained Zn clusters (isolated [ZnOa] clusters and [ZnbOc] oligomers). The presence of clusters indicates the formation of Zn–O–Zr sites. Interestingly, our calculations revealed that the Zn species in the clusters are easily exposed on the ZnxZr1–xO2–x surface. This result is in line with the experimental results, suggesting that Zn species were unevenly distributed on the ZnxZr1–xO2–x surface and deposited near the surface. The addition of excess Zn to ZrO2 led to the formation of both Zn-containing clusters and ZnO nanoparticles. During the reactions, the Zn–O–Zr sites derived from the clusters showed specific activity for CO2-to-methanol hydrogenation. Understanding the active-site structure will lead to the future development of ZnxZr1–xO2–x catalysts. 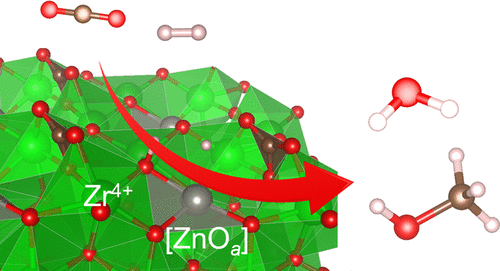