Abstract
When the electric conductance of a nano-sized metal is measured at low temperatures, it often exhibits complex but reproducible patterns as a function of external magnetic fields called quantum fingerprints in electric conductance. Such complex patterns are due to quantum–mechanical interference of conduction electrons; when thermal disturbance is feeble and coherence of the electrons extends all over the sample, the quantum interference pattern reflects microscopic structures, such as crystalline defects and the shape of the sample, giving rise to complicated interference. Although the interference pattern carries such microscopic information, it looks so random that it has not been analysed. Here we show that machine learning allows us to decipher quantum fingerprints; fingerprint patterns in magneto-conductance are shown to be transcribed into spatial images of electron wave function intensities (WIs) in a sample by using generative machine learning. The output WIs reveal quantum interference states of conduction electrons, as well as sample shapes. The present result augments the human ability to identify quantum states, and it should allow microscopy of quantum nanostructures in materials by making use of quantum fingerprints. 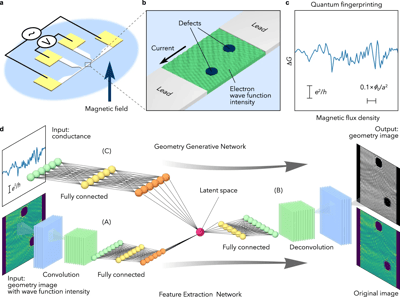