We developed an on-chip enrichment method based on an aqueous two-phase system of dextran/polyethylene glycol mix, DEX/PEG ATPS, for digital bioassay. Accordingly, we prepared an array device of femtoliter reactors that displays millions of uniformly shaped DEX-rich droplets under a PEG-rich medium. The DEX-rich droplets effectively enriched DNA molecules from the PEG-rich medium. To quantify the enrichment power of the system, we performed a digital bioassay of alkaline phosphatase (ALP). Upon genetically tagging ALP molecules with the DEX-binding domain (DBD) derived from dextransucrase, the ALP molecules were enriched 59-fold in the DEX droplets in comparison to that in a conventional digital bioassay. Subsequently, we performed a Cas13-based digital SARS-CoV-2 RNA detection assay to evaluate the performance of this system for a more practical assay. In this assay, the target RNA molecules bound to the DBD-tagged Cas13 molecules were effectively enriched in the DEX droplets. Consequently, an enrichment factor of 31 was achieved. Enrichment experiments for nonlabeled proteins were also performed to test the expandability of this technique. The model protein, nontagged β-galactosidase, was enriched in DEX droplets containing DBD-tagged antibody, with an enrichment factor of over 100. Thus, this system enabled effective on-chip enrichment of target molecules to enhance the detection sensitivity of digital bioassays without using external instruments or an external power source, which would be applicable for on-site bioassays or portable diagnostic tests. 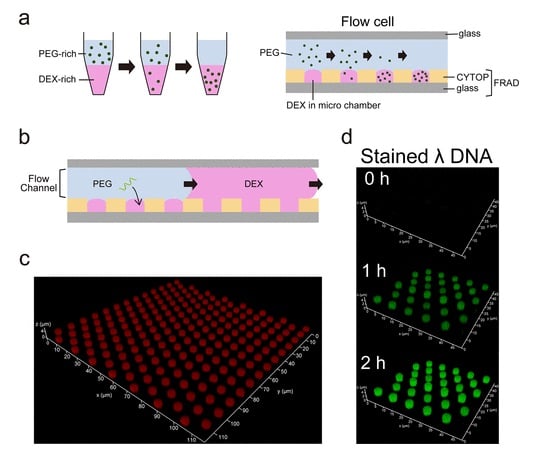