According to Onsager’s principle, electrical resistance R of general conductors behaves as an even function of external magnetic field B. Only in special circumstances, which involve time reversal symmetry (TRS) broken by ferromagnetism, the odd component of R against B is observed. This unusual phenomenon, called odd-parity magnetoresistance (OMR), was hitherto subtle (< 2%) and hard to control by external means. Here, we report a giant OMR as large as 27% in edge transport channels of an InAs quantum well, which is magnetized by a proximity effect from an underlying ferromagnetic semiconductor (Ga,Fe)Sb layer. Combining experimental results and theoretical analysis using the linearized Boltzmann’s equation, we found that simultaneous breaking of both the TRS by the magnetic proximity effect (MPE) and spatial inversion symmetry (SIS) in the one-dimensional (1D) InAs edge channels is the origin of this giant OMR. We also demonstrated the ability to turn on and off the OMR using electrical gating of either TRS or SIS in the edge channels. These findings provide a deep insight into the 1D semiconducting system with a strong magnetic coupling. 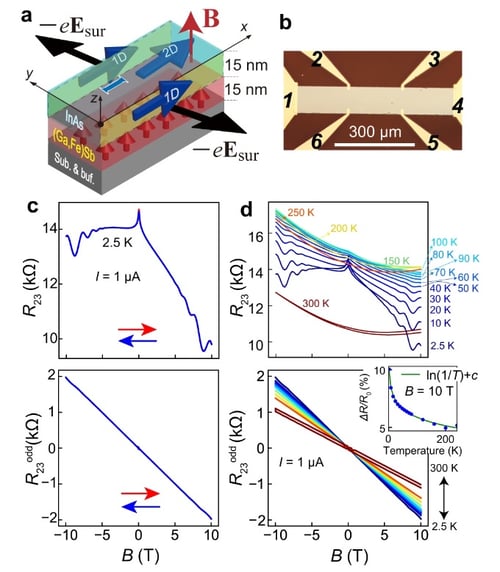