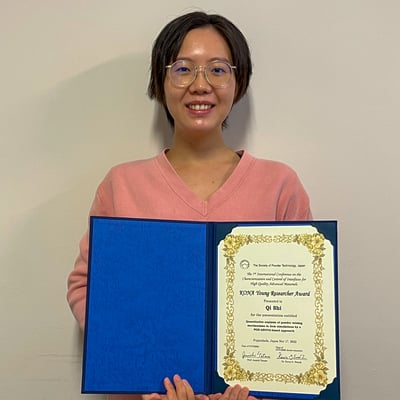 KONA Young Researcher Award
It was presented to students and young researchers for their outstanding poster presentation characterized by excellence in research, clarity in presentation, and personal knowledge in a discussion.

"Quantitative Analysis of Powder Mixing Mechanism in DEM Simulations by a POD-ANOVA-based Approach"
In this study, the proper orthogonal decomposition (POD) method with analysis of variance (ANOVA) is ingeniously combined to realize quantitative analysis of powder mixing mechanisms in discrete element method (DEM) simulations. POD plays the role of interpreting main feature of particle coordinate changes, which identifies the convection or diffusion mechanism mathematically through the clumped or random distribution of POD mode values, respectively. The ANOVA is subsequently applied to meshing statistic of the mode values, giving quantitative information about the contribution percentage of convection/diffusion by the proportion of between-sum-of-squares (BSS)/within-sum-of-squares (WSS) to the total sum of squares (TSS) of POD mode values. This hybrid POD-ANOVA approach is validated through mixing studies in a common rotating drum, with the mixing simulated by our in-house code FELMI. Standard POD-ANOVA is utilized to compare transverse powder mixing with varied filling levels, evaluating the convection/diffusion rate of the mixing process. The yielded results turn to agree well with the traditional analysis. In addition, the dynamic mixing kinetics of particles are reliably and precisely produced through the windowed POD-ANOVA, that is, transverse mixing is featured by transition from an initial pure convection to the final pure diffusion. In all, POD-ANOVA is promising in the sense that mixing mechanisms can be correctly, reliably, and efficiently quantified for the first time with data science assistance.

It is my great honor to win this award. I would like to express my sincere appreciation to every member in my lab who has given me help and valuable comments during the research, especially my supervisor Prof. Mikio Sakai, Dr. Guangtao Duan, Dr. Shuo Li and Mr. Rui Li. In the future research, I will keep trying my best.