Abstract
The evolution of information technology has been driven by the discovery of new forms of large magnetoresistance, such as giant magnetoresistance and tunnelling magnetoresistance, in magnetic multilayers. Recently, new types of this effect have been observed in much simpler bilayers consisting of ferromagnetic and non-magnetic thin films. However, the magnitude of the change in resistance with magnetic field in these materials is very small, varying between 0.01 and 1%. Here, we demonstrate that non-magnetic–ferromagnetic bilayers consisting of a conducting non-magnetic InAs quantum well and an insulating ferromagnetic (Ga,Fe)Sb layer exhibit giant proximity magnetoresistance of approximately 80% at high magnetic field, and that its magnitude can be controlled by a gate. The mechanism for this large magnetoresistance is a strong magnetic proximity effect. The spin splitting in the InAs quantum well induced by the magnetic proximity effect can be varied between 0.17 meV and 3.8 meV by varying the gate voltage. In principle, this provides a mechanism to locally access Majorana fermions in InAs-based Josephson junctions and introduces a new concept of magnetic-gating spin transistors in which the non-magnetic channel current is modulated by both electrical and magnetic means. 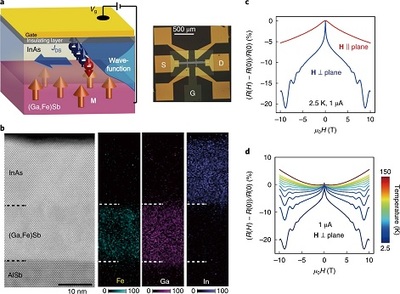