Physics of Weyl electrons has been attracting considerable interests and further accelerated by recent discoveries of giant anomalous Hall effect (AHE) and topological Hall effect (THE) in several magnetic systems including non-coplanar magnets with spin chirality or small-size skyrmions. These AHEs/THEs are often attributed to the intense Berry curvature generated around the Weyl nodes accompanied by band anti-crossings, yet the direct experimental evidence still remains elusive. Here, we demonstrate an essential role of the band anti-crossing for the giant AHE and THE in MnGe thin film by using the terahertz magneto-optical spectroscopy. The low-energy resonance structures around ~ 1.2 meV in the optical Hall conductivity show the enhanced AHE and THE, indicating the emergence of at least two distinct anti-crossings near the Fermi level. The theoretical analysis demonstrates that the competition of these resonances with opposite signs is a cause of the strong temperature and magnetic-field dependences of observed DC Hall conductivity. These results lead to the comprehensive understanding of the interplay among the transport phenomena, optical responses and electronic/spin structures. 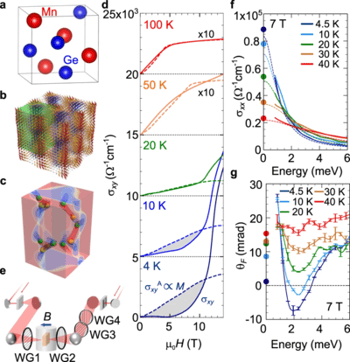