A proximity effect at a van der Waals (vdW) interface enables creation of an emergent quantum electronic ground state. Here we demonstrate that an originally superconducting two-dimensional (2D) NbSe2 forms a ferromagnetic ground state with spontaneous spin polarization at a vdW interface with a 2D ferromagnet V5Se8. We investigated the anomalous Hall effect (AHE) of the NbSe2/V5Se8 magnetic vdW heterostructures, and found that the sign of the AHE was reversed as the number of the V5Se8 layer was thinned down to the monolayer limit. Interestingly, the AHE signal of those samples was enhanced with the in-plane magnetic fields, suggesting an additional contribution to the AHE signal other than magnetization. This unusual behavior is well reproduced by band structure calculations, where the emergence of the Berry curvature along the spin-degenerate nodal lines in 2D NbSe2 by the in-plane magnetization plays a key role, unveiling a unique interplay between magnetism and Zeeman-type spin-orbit interaction in a non-centrosymmetric 2D quantum material. 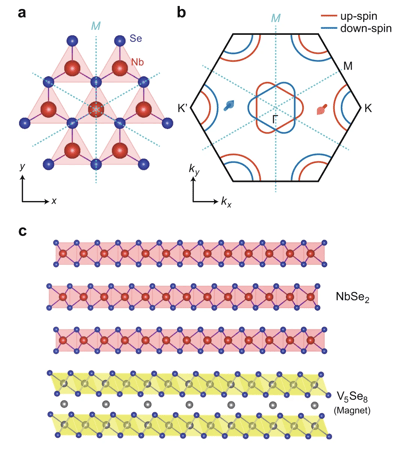