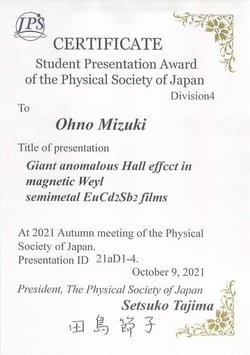 ＜Your impression & future plan＞
I am very honored to receive the impressive award. I sincerely thank Prof. Masashi Kawasaki and Masaki Uchida for providing me with excellent supervision and a research environment, and I also thank all my collaborators. I will keep doing my best.