Tokimaru Yuki (D3), Department of Chemistry and Biotechnology, received the BEST POSTER AWARD at the IFOC-9 Organized by JSPS 116 Committee

On 19th November 2018, Tokimaru Yuki, Department of Chemistry and Biotechnology (D3), received the BEST POSTER AWARD at the Ninth International Forum on Chemistry of Functional Organic Chemicals (IFOC-9) Organized by JSPS 116 Committee. This award is given for the superior poster presentor at the conference. 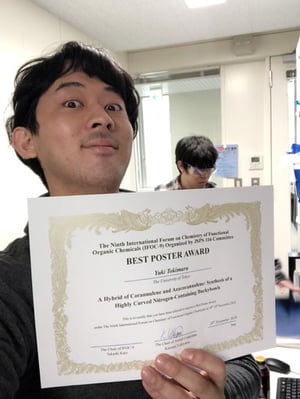 <About awarded research>
Title: A Hybrid of Corannulene and Azacorannulene: Synthesis of a Highly Curved Nitrogen-Containing Buckybowl

Heteroatom-containing buckybowl molecules have been gathering great attention due to their unique structures, properties, and potential applications. However, most of the heteroatom-containing buckybowls reported thus far exhibit partial C60?xEx structures (E = heteroatom), and compounds that exhibit the partial structures of higher hetero-fullerenes are limited. In this presentation, I reported the bottom-up synthesis of a highly curved azabuckybowl, which consists more than half structure of azafullerene C80-XNX. The highly curved azabuckybowl was prepared only in 3 steps through 1,3-dipolar cycloaddition of an azomethine ylide with corannulene. X-ray diffraction analysis of the single crystal revealed that its highly curved structure, which is almost close to curveture of fullerenes.

<Comments>
It is a great honor to be given this poster award. I appreciate all coresearchers who helped me during the course of research.