Assistant Professor Takahiro Misawa and Professor Masatoshi Imada have overcome the difficulty by utilizing the supercomputer K. By analyzing the theoretical model derived from the ab initio calculation, they find that the uniform electron-density fluctuation, which is thought to be not important so far, induces the superconductivity.

Only from the experimental information of lattice structures and elements for the iron-based superconductors, they have succeeded in numerically reproducing the superconducting state from the principles of the quantum mechanics and statistical physics. This calculation is the world’s first success in generating superconducting state in an ab initio way. Furthermore, they identify the origin of the superconductivity by systematically controlling the electron-electron Coulomb interaction. Such an ideal control is difficult in experiments. As a result, they show that superconductivity always appears when the electron-density fluctuation is enhanced. This result has significant implications in the study of the superconductivity. By using the revealed mechanism as a guideline, it is expected that searches for higher-Tc materials will be inspired. 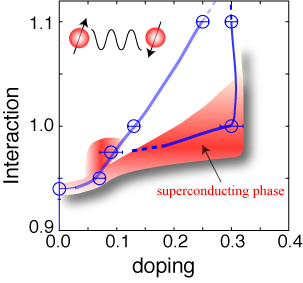