Grain boundary (GB) migration plays an important role in modifying the microstructures and the related properties of polycrystalline materials, and is governed by the atomistic mechanism by which the atoms are displaced from one grain to another. Although such an atomistic mechanism has been intensively investigated, it is still experimentally unclear as to how the GB migration proceeds at the atomic scale. With the aid of high-energy electron-beam irradiation in atomic-resolution scanning transmission electron microscopy, we controllably triggered the GB migration in α-Al2O3 and directly visualized the atomistic GB migration as a stop motion movie. It was revealed that the GB migration proceeds by the cooperative shuffling of atoms on GB ledges along specific routes, passing through several different stable and metastable GB structures with low energies. We demonstrated that GB migration could be facilitated by the GB structural transformations between these low-energy structures. 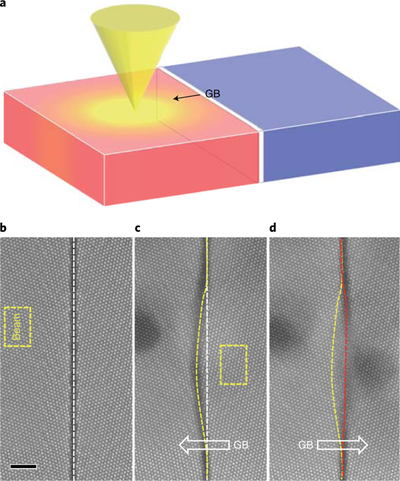