On August 20, 2017, Hirotake Udono, Ph.D. candidate at the Department of Nuclear Engineering and Management, won the Best Presentation Award at the Multiphase Symposium 2017 organized by the Japanese Society for Multiphase Flow. This symposium is held once every year and aimed at giving researchers and students the opportunities to present their results and ideas on complex multiphase flow involving solid, liquid and/or gas universally observed in a wide range of aspects from nature to industrial plants. The students who give an excellent presentation are entitled to the Best Presentation Awards. 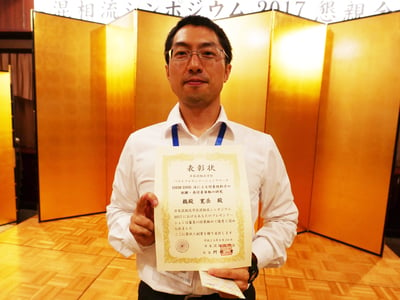 With the infinitesimal scale taken into consideration, experimental observation is extremely challenging. To achieve the findings, we chose a numerical approach using the DEM-DNS method that can precisely simulate particle-fluid interaction on the micro scale.

It was a great honor for me to win the award at the symposium. I really appreciate Dr. Mikio Sakai (Associate Professor) for his inspiring guidance and advice, the secretaries for their kind support, and all of my colleagues. To deserve this award, I’ll keep full commitment to my work.