Congenital disorders characterized by the quantitative and qualitative reduction in the number of functional nephrons are the primary cause of chronic kidney disease (CKD) in children. We aimed to describe the alteration of urinary extracellular vesicles (uEVs) associated with decreased renal function during childhood. By nanoparticle tracking analysis and quantitative proteomics, we identified differentially expressed proteins in uEVs in bilateral renal hypoplasia, which is characterized by a congenitally reduced number of nephrons. This expression signature of uEVs reflected decreased renal function in CKD patients by congenital anomalies of the kidney and urinary tract or ciliopathy. As a proof-of-concept, we constructed a prototype ELISA system that enabled the isolation of uEVs and quantitation of expression of molecules representing the signature. The system identified decreased renal function even in its early stage. The uEVs signature could pave the way for non-invasive methods that can complement existing testing methods for diagnosing kidney diseases. 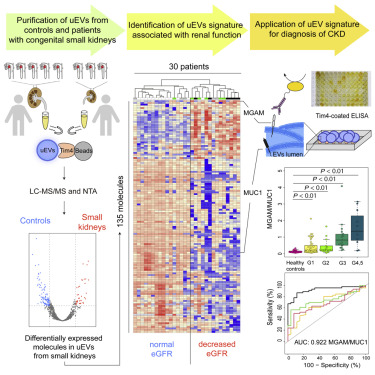