Prof. Akira Furusawa and his group at The University of Tokyo, Prof. Jeremy O’Brien at University of Bristol, Dr. Alberto Politi at University of Southampton and NTT Device Technology Laboratories integrated the core circuits of quantum teleportation, which generate and detect quantum entanglement, into a photonic chip.

While there has been significant progress in current technology of information processing, its performance is said to be reaching the fundamental limit of classical physics. On the other hand, it has been predicted that principles of quantum mechanics enable us to realize ultimate large-capacity communication (quantum communication) and ultra-high-speed computers (quantum computers), overcoming the limit of current technologies. One of the most important tasks is to establish technologies of quantum teleportation. This transfers signals of quantum bits in photons from a sender to a receiver at a distance. The quantum teleportation has many applications, such as long-distance quantum communication by sending information through a sequence of teleportation systems, and optical quantum computers. In 2013, Prof. Furusawa and his colleagues succeeded in realizing perfect quantum teleportation and improving its efficiency by more than a hundred times from those of the past. However, the setup of quantum teleportation required a large optical table with hundreds of optical instruments, and reached the limit in terms of scalability.
The photonic chip contains silica-optical-waveguide circuits, formed in silica on a silicon board measuring 26 millimeters by 4 millimeters (0.0001 square meters) with silicon micromachining technology. The optical system was reduced by a ten-thousandth in size. They generated entangled beams and verified the entanglement by homodyne detection with interferometers inside the chip. The achievement enables us to perform the perfect quantum teleportation by Prof. Furusawa’s group in 2013, with the photonic chip. The result drastically solved the problem with scalability, and will open the way to realization of ultimate large-capacity communication and ultra-high-speed computers.
They made a big step closer to realization of integrating a quantum computer into a photonic chip. The silica-optical-waveguide circuits in this experiment was originated in technologies of optical communication devices widely used today. It was a great progress not only in the integration, but also in optical transmission efficiency, mechanical precision and stability. One of the next steps is to integrate whole the system of quantum teleportation. 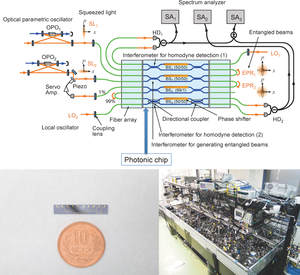