The improvement of power device performance significantly contributes to energy saving. The operation with lower energy loss is expected especially by using silicon carbide (SiC) instead of silicon (Si) which is the common material. However, the transistors with SiC are still suffered from large resistance and insufficient reliability, mainly due to the defects on SiC by the formation of silicon dioxide, as the gate dielectric film. The research group of Koji Kita, an associate professor in the University of Tokyo, found that the density of interface defects is significantly reduced by employing the reaction condition where the byproduct carbon should be ejected as carbon monoxides. They demonstrated the achievement of world’s smallest density of defects with a MOS (metal-oxide-semiconductor) test structure by employing that condition. This technique provides high quality interface of SiC without any additional processes using nitrogen containing gas, which assures the validity of the method in the industry. This technique is expected to improve the performance of SiC power devices and to accelerate the spread of them throughout the society, which will contribute to energy saving through various applications, including electric power transmissions, electric vehicles, and factory machines. 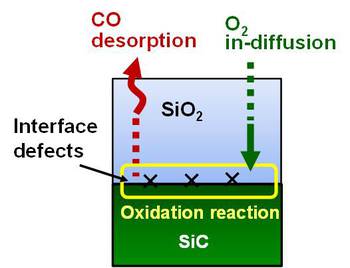