Caregivers hug their infants to express affection and joy. However, it remains unknown how infants react to being hugged. Here we examined heart rate responses in first-year infants during a hug, hold, and tight hug from parents. Infants older than four months showed an increased R-R interval (RRI) during a hug, indicating reduced heart rates and pronounced parasympathetic activity. Few head movements predicted a higher RRI increase in infants during a parental hug compared with that during a hold and tight hug. Infants did not show an increased RRI during a hug from a female stranger. Infants younger than four months did not show RRI increase during parental hug but exhibited a decreased RRI correlated with contact pressure. Parents showed an increased RRI during hugging their infants. These results suggest the parent-infant hug underlies the parent-infant bonding and psychophysiological development of infants. 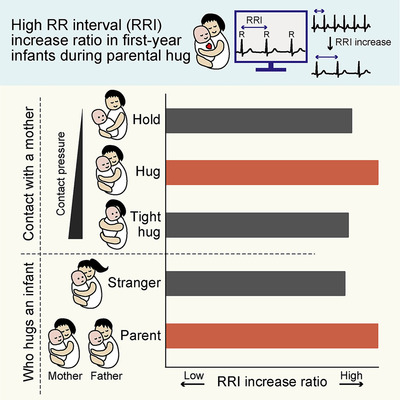