On 2nd February 2019, Shinichiro Akichika (D2), Department of Chemistry and Biotechnology , received the Excellent Poster Award at The 20th Takeda Science Foundation Symposium on Bioscience, RNA Neobiology. This award was given to 5 outstanding posters at this symposium. 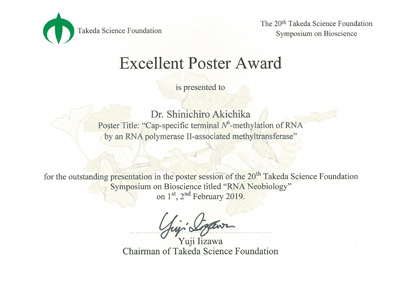 mRNA is transcribed from genome DNA and matures through several processing events including 5' capping, splicing and 3' polyadenylation. Recent studies using deep sequencing methods detected several species of chemical modifications in eukaryotic mRNAs and revealed the importance of N6-methyladenosine(m6A) modification in mRNA metabolism and diverse functions. In addition to the internal m6A, N6-2'-O-dimethyladenosine(m6Am) is present at the transcription start nucleotide of capped mRNAs in vertebrates. However, its biogenesis and functional role remain elusive. In this study, we identified the enzyme responsible for N6-methylation of m6Am and named the enzyme as CAPAM. Biochemical analysis of CAPAM suggested that CAPAM is recruited to the early elongation complex of RNA polymerase II and forms m6Am modification co-transcriptionally. As a functional role of m6Am modification, we found that N6-methylation of m6Am promotes the translation of capped mRNAs.

It's a great honor to receive this poster award. I would like to thank Prof. Tsutomu Suzuki, collaborators and all members of Suzuki laboratory. I'd like to continue to push forward my research.