The 108th The Japan Academy Award Ceremony was held on June 25, 2018 with presence of Emperor and empress. In the ceremony, president of The Japan Academy gave an opening remarks. Followed by the opening remarks, the award ceremony was held. After the award ceremony, Prime minister and Minister of education, Culture, Sports, Science and Technology offered congratulatory addresses.

＜Reasons for winning the Award＞
Professor Takuzo Aida, Department of Chemistry and Biotechnology, received the Japan Academy Prize for his outstanding research on the development of innovative soft materials.

He has been developing highly original and creative researches in material sciences through interactions with other scientific disciplines such as physics and life sciences. Many of his representative works were initiated by serendipitous findings done by his students and colleagues and therefore curiosity-driven. The researchers’ eyes in molecular sciences are now slowly shifting from well-equilibrated molecular systems to more complex, non-equilibrated systems. Note that highly anisotropic hierarchical structural ordering can provide materials with extraordinary properties. However, this process is known to be interfered by kinetic traps that emerge in a transition state from nano to mesoscopic size regimes. The important issue is how one can avoid or manipulate such irreversible kinetic traps? By the seminal discovery of extrusion polymerization made almost 20 years ago, he noticed how multivalent interactions and physical perturbations are efficient to exclude or control kinetic traps and properly connect the missing link between the nano and mesoscale phenomena. As a pioneer, Prof. Aida has been promoting this immature research field, and accomplished numerous seminal achievements for creating innovative soft materials such as light-harvesting dendritic antennae, CNT bucky gels, electroconductive graphitic nanotubes, molecular glues, anisotropic aquamaterials, and more recently, self-healable polymer glass. 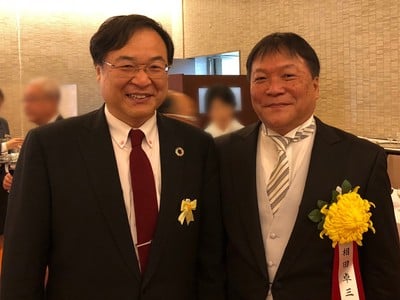 ＜Comments from Professor Aida＞
First of all, I would like to sincerely appreciate many of my current and former students and research staffs at U. Tokyo and Riken, who have been kindly maintaining and properly renovating our research culture over a long period of the lab history. I also appreciate generous and open-mind department colleagues and powerful members at RIKEN CEMS (current key role) for their continuous supports, together with several international friends offering consistent friendship and also JST/JSPS for their big financial supports. Without any of these friendships and supports, I would not have had the opportunity to receive the prize. Even from now on, I would like to do my best to attract worldwide attention for the bright future of science. 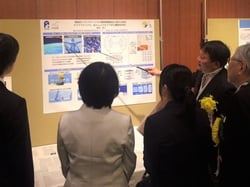 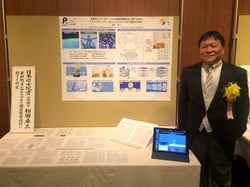