Conventional strategies for generating cells or tissues of interest from pluripotent stem cells (PSCs) bring concerns over safety and cost, which are caused by: (1) the use of reagents containing undefined factors, e.g., fetal bovine serum, in culture; (2) the formation of embryoid bodies (EBs) that possibly differentiate into unwanted tissues; and (3) the use of gene introductions or recombinant proteins as inducers. From this point of view, an ideal approach is the differentiation of PSCs into a certain tissue under defined conditions, in which unwanted differentiation is suppressed, using small molecules that have advantages in cost and stability.

Dr. Kosuke Kanke (The University of Tokyo Graduate School of Medicine), Project Associate Professor Shinsuke Ohba, and Professor Yuichi Tei/ Ung-il Chung (Department of Bioengineering, The University of Tokyo Graduate School of Engineering) developed an efficient protocol for the differentiation of PSCs into osteoblasts via mesoderm formation using four small molecules under defined conditions. The protocol, which utilizes known components such as small molecules and suppresses unwanted differentiation of PSCs, will overcome the concerns described above. The protocol offers a tool for in vitro mechanistic studies of osteoblast development, screening for bone augmentation drugs, pathological studies of bone diseases, and stem cell-based therapies for massive bone defects. 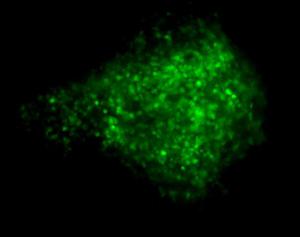