Materials that possess nontrivial topology and magnetism is known to exhibit exotic quantum phenomena such as the quantum anomalous Hall effect. Here, we fabricate a novel magnetic topological heterostructure Mn4Bi2Te7/Bi2Te3 where multiple magnetic layers are inserted into the topmost quintuple layer of the original topological insulator Bi2Te3. A massive Dirac cone (DC) with a gap of 40–75 meV at 16 K is observed. By tracing the temperature evolution, this gap is shown to gradually decrease with increasing temperature and a blunt transition from a massive to a massless DC occurs around 200–250 K. Structural analysis shows that the samples also contain MnBi2Te4/Bi2Te3. Magnetic measurements show that there are two distinct Mn components in the system that corresponds to the two heterostructures; MnBi2Te4/Bi2Te3 is paramagnetic at 6 K while Mn4Bi2Te7/Bi2Te3 is ferromagnetic with a negative hysteresis (critical temperature  ~20 K). This novel heterostructure is potentially important for future device applications. 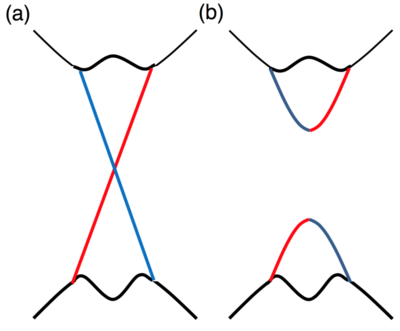