Abstract
The photoisomerization of molecules is widely used to control the structure of soft matter in both natural and synthetic systems. However, the structural dynamics of the molecules during isomerization and their subsequent response are difficult to elucidate due to their complex and ultrafast nature. Herein, we describe the ultrafast formation of higher-orientation of liquid-crystalline (LC) azobenzene molecules via linearly polarized ultraviolet light (UV) using ultrafast time-resolved electron diffraction. The ultrafast orientation is caused by the trans-to-cis isomerization of the azobenzene molecules. Our observations are consistent with simplified molecular dynamics calculations that revealed that the molecules are aligned with the laser polarization axis by their cooperative motion after photoisomerization. This insight advances the fundamental chemistry of photoresponsive molecules in soft matter as well as their ultrafast photomechanical applications. 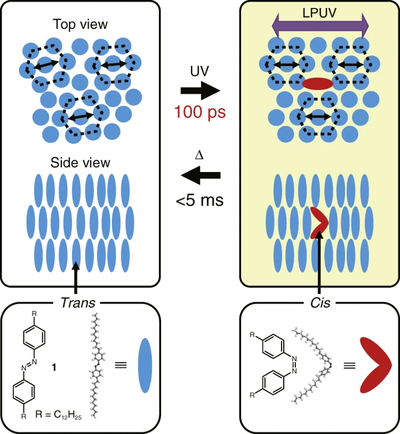