Rational control of the self-assembly of large structures is one of the key challenges in chemistry, and is believed to become increasingly difficult and ultimately impossible as the number of components involved increases. So far, it has not been possible to design a self-assembled discrete molecule made up of more than 100 components. Such molecules—for example, spherical virus capsids — are prevalent in nature, which suggests that the difficulty in designing these very large self-assembled molecules is due to a lack of understanding of the underlying design principles. For example, the targeted assembly of a series of large spherical structures containing up to 30 palladium ions coordinated by up to 60 bent organic ligands was achieved by considering their topologies. Here we report the self-assembly of a spherical structure that also contains 30 palladium ions and 60 bent ligands, but belongs to a shape family that has not previously been observed experimentally. The new structure consists of a combination of 8 triangles and 24 squares, and has the symmetry of a tetravalent Goldberg polyhedron. Platonic and Archimedean solids have previously been prepared through self-assembly, as have trivalent Goldberg polyhedra, which occur naturally in the form of virus capsids and fullerenes. But tetravalent Goldberg polyhedra have not previously been reported at the molecular level, although their topologies have been predicted using graph theory. We use graph theory to predict the self-assembly of even larger tetravalent Goldberg polyhedra, which should be more stable, enabling another member of this polyhedron family to be assembled from 144 components: 48 palladium ions and 96 bent ligands. 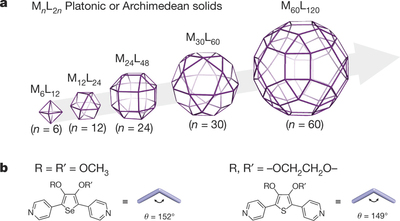 a, Schematic representation of MnL2n complexes with the symmetry of Platonic or Archimedean solids. Each vertex represents a metal ion centre and each edge represents an organic ligand. Under the prerequisite that each vertex connects to four edges (because the metal ion used in this system (palladium(II)) has a square planar coordination geometry), only five structures are allowed. MnL2n complexes with n?=?6, 12, 24 and 30 have previously been synthesized.

b, Molecular structures of the organic ligands. The bend angle of the ligand θ dictates the final self-assembled product. A very small change in θ can result in very different final products.