Ferroelectrics with spontaneous electric polarization play an essential role in today’s device engineering, such as capacitors and memories. Their physical properties are further enriched by suppressing the long-range polar order, as exemplified by quantum paraelectrics with giant piezoelectric and dielectric responses at low temperatures. Likewise in metals, a polar lattice distortion has been theoretically predicted to give rise to various unusual physical properties. However, to date, a “ferroelectric”-like transition in metals has seldom been controlled, and hence, its possible impacts on transport phenomena remain unexplored. We report the discovery of anomalous enhancement of thermopower near the critical region between the polar and nonpolar metallic phases in 1T′-Mo1−xNbxTe2 with a chemically tunable polar transition. It is unveiled from the first-principles calculations and magnetotransport measurements that charge transport with a strongly energy-dependent scattering rate critically evolves toward the boundary to the nonpolar phase, resulting in large cryogenic thermopower. Such a significant influence of the structural instability on transport phenomena might arise from the fluctuating or heterogeneous polar metallic states, which would pave a novel route to improving thermoelectric efficiency. 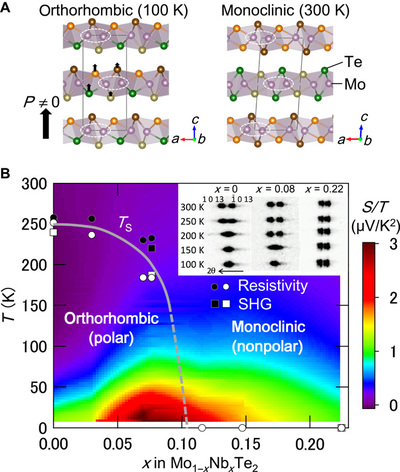 (A) Lattice structures for 1T′-MoTe2 at 100 K (left) and 300 K (right), deduced from structural analyses based on single-crystal x-ray diffraction. Mo-Mo bonds enclosed by dashed ellipses form a zigzag chain of Mo atoms along the b axis (see also fig. S8). The Te ions are color-coded depending on the crystallographic sites. Small black arrows near the Te ions schematically denote the displacements relative to the center of Mo ions in the low-temperature orthorhombic phase. (B) The contour plot of S/T (thermopower divided by temperature) and structural phase diagram as functions of temperature T and Nb concentration x for 1T′-Mo1−xNbxTe2. The circles and squares denote the transition temperatures TS determined by the resistivity and optical second-harmonic generation (SHG), respectively. The open and closed symbols correspond to the cooling and warming runs, respectively. The gray line is a guide to the eyes. Inset displays the temperature variation of single-crystal x-ray diffraction images around the 1 0 13 and  0 13 reflections in the monoclinic phase for x = 0, 0.08, and 0.22. These Bragg reflections coalesce into 1 0 13 in the orthorhombic phase. The direction of the horizontal arrow on the photograph corresponds to that of 2θ angle of the diffractometer.