Synthesis and reactivity of iron-dinitrogen complexes have been extensively studied, because the iron atom plays an important role in the industrial and biological nitrogen fixation. As a result, iron-catalyzed reduction of molecular dinitrogen into ammonia has recently been achieved. Here we show that an iron-dinitrogen complex bearing an anionic PNP-pincer ligand works as an effective catalyst towards the catalytic nitrogen fixation, where a mixture of ammonia and hydrazine is produced. In the present reaction system, molecular dinitrogen is catalytically and directly converted into hydrazine by using transition metal-dinitrogen complexes as catalysts. Because hydrazine is considered as a key intermediate in the nitrogen fixation in nitrogenase, the findings described in this paper provide an opportunity to elucidate the reaction mechanism in nitrogenase. 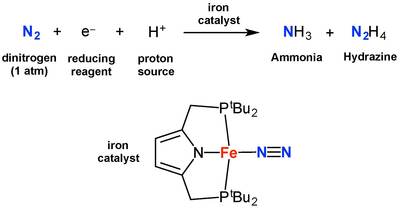