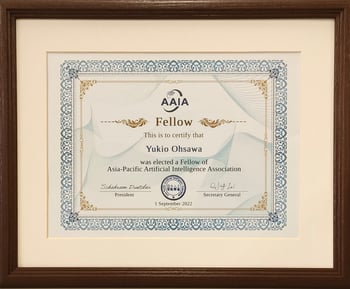 About awarded research
The reason: as a top scientist with outstanding achievements in the area of data and AI.

Your impression & future plan
I am truly honored. I seem to be the first from the University of Tokyo. In the list of Fellows of AAIA, we find a lineup of shining great researchers in the field of artificial intelligence from Japan and the world including only 13 Fellows from Japan (very famous, including Professor Fukushima, who invented Neocognitron, the origin of deep learning). I hope to continue to contribute to the development of true AI methods and theories toward innovations.