Abstract
Multiferroic materials with both ferroelectric and ferromagnetic orders provide a promising arena for the electrical manipulation of magnetization through the mutual correlation between those ferroic orders. Such a concept of multiferroics may expand to semiconductor with both broken symmetries of spatial inversion and time reversal, that is, polar ferromagnetic semiconductors. Here, we report the observation of current-driven magnetization switching in one such example, (Ge,Mn)Te thin films. The ferromagnetism caused by Mn doping opens an exchange gap in original massless Dirac band of the polar semiconductor GeTe with Rashba-type spin-split bands. The anomalous Hall conductivity is enhanced with increasing hole carrier density, indicating that the contribution of the Berry phase is maximized as the Fermi level approaches the exchange gap. By means of pulse-current injection, the electrical switching of the magnetization is observed in the (Ge,Mn)Te thin films as thick as 200 nm, pointing to the Rashba-Edelstein effect of bulk origin. The efficiency of this effect strongly depends on the Fermi-level position owing to the efficient spin accumulation at around the gap. The magnetic bulk Rashba system will be a promising platform for exploring the functional correlations among electric polarization, magnetization, and current. 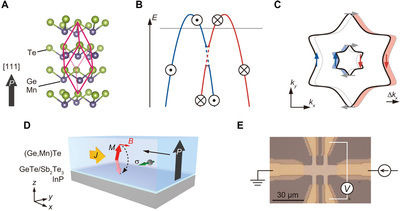