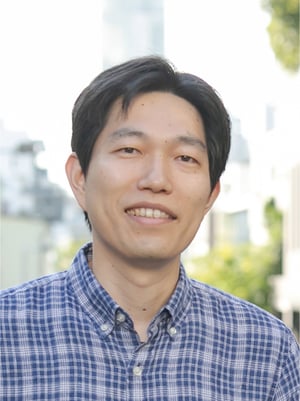 We have developed a new synthetic strategy for unique nanostructures by self-assembly, where molecules are spontaneously assembled into a precise nanostructure. Many organic compounds are generally shaped by strong covalent bonds. When precise weak interactions such as hydrogen bonds or coordination bonds are worked among molecules, the organic molecules can precisely gather into precise aggregates. In other words, if we design directions and lengths of inter-molecular weak interactions of a small molecular building block, we can create polyhedral or repeated molecular structures in nanometer scale. Based on such a research background, our research focuses on construction of novel nanostructures via self-assembly of short peptides and metal ions. Since peptides flexibly adopt a variety of conformations such as helices, sheets, and loops according to the amino acid sequences, self-assembly of peptides and metal ions enables construction of various, unique molecular structures based on the peptide conformations. For example, by designing a peptide loop conformation, we succeeded in construction of a unique interlocking molecule in which 4 molecular rings were interlocking to form a tetrahedral shape [ref 1]. This is one of the most complex molecular topologies among the ever-synthesized molecules (the crossing number, the degree of topological complexity, reached 12, which is the current champion record). We also revealed that it was possible to construct another topology of both 4 molecular rings and 12-crossings by choosing different peptide sequences [ref 2]. Furthermore, we also succeeded in the first artificial construction of a precise β-barrel structure, which is often seen in natural protein structures but never been chemically constructed so far [ref 3]. Likewise, nanotubes and knitted nanosheets have also been achieved recently. Thus, we have steadily created unprecedented, unique nanostructures in nanometer scale by using our own self-assembly techniques. 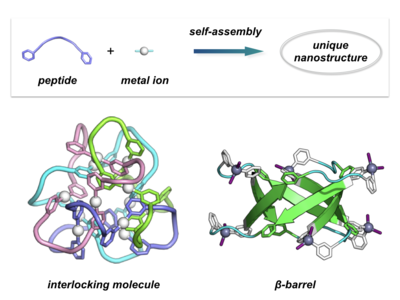 Self-assembly of peptides is the crucial mechanism for construction of proteins or organisms common in every biological system. By using our self-assembly techniques on short peptides and metal ions, we would like to create beautiful and remarkable molecular structures comparable to (or even beyond) those of biological systems in the future.