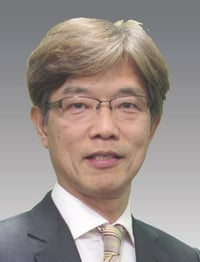 Concrete is the second most consumed material/substance and an indispensable construction material for the development of social capital such as buildings and civil structures. But the production of Portland cement, which is a main material of concrete, needs a large amount of limestone, which is a finite natural resource (about 100 years reserves), and emits a large amount of CO2 annually (about 7% of worldwide). To fundamentally solve the problems of resource depletion and CO2 emission, in “C4S Research and Development Project”, Ca in cement concrete of buildings and civil structures is regarded as a potential resource capable of capturing CO2, and a technology is being developed to regenerate concrete waste generated by the demolition of buildings and civil structures and atmospheric CO2 as calcium carbonate concrete (CCC), which will be put into practical use as a main construction material to replace current cement concrete as shown in Figure 1. Consequently, a new resource recycling system (C4S: Calcium carbonate circulation system for construction) will be realized.

We are developing a technology to make CCC as shown in Figure 2. CO2 is blown into water containing cement concrete waste to make a solution of calcium hydrogen carbonate (Ca(HCO3)2), which is flowed between the concrete waste particles. Calcium carbonate crystals are precipitated between the particles by controlling temperature, pH or evaporation rate, and the particles are bonded to each other to form CCC (maximum strength to date: 8.6MPa, maximum diameter to date: 5cm) as shown in Figure 3. And it is expected that CCC becomes carbon minus (CO2 is not emitted but absorbed), and CO2 emissions are very low even if CCC is recycled into CCC again as shown in Figure 4.

When CCC is put into practical use in the future, the total amount of CO2 released into the atmosphere by decarboxylation of limestone during cement production (about 2 billion tons in Japan and about 55 billion tons in the world) will be captured and stabilized as CCC. Since CCC can be recycled many times with low energy, the hands of the environmental impact clock, which cement concrete has advanced since the Anthropocene, are rewound. In ancient times, hundreds of millions of years ago, CO2 was deposited as limestone, and the Himalayas and Alps were raised, making the cool earth where living things can live. The "C4S Research & Development Project" is trying to reproduce this phenomenon in a modern civilized society and save the earth again.

The research results of the "C4S Research & Development Project" will be presented at the side event of ICEF (Innovation for Cool Earth Forum, https://www.icef.go.jp/program/) to be held on October 6th and discussions will be made for the realization of carbon recycling in the future. In addition, a scientific paper will be published in the Journal of Advanced Concrete Technology on October 8th (https://doi.org/10.3151/jact.19.1052). 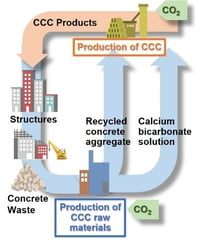 Figure 3 Produced CCC
(up: Compressive Strength of
8.6MPa, under: Diameter of 5cm) 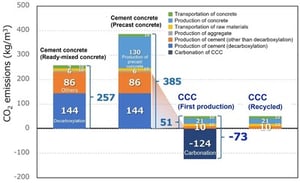