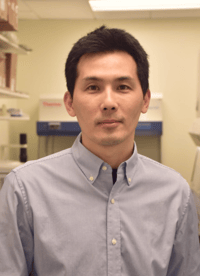 <Biography>
October 2018 – Associate Professor
Department of Chemistry and Biotechnology, School of Engineering, The University of Tokyo

The nervous system regulates our mind and behavior. Precise regulation of each neuron and connections between neurons are required for proper functioning of the brain. Therefore, elucidating the mechanisms regulating brain function facilitates developing therapies for neurodevelopmental and neurodegenerative diseases such as Parkinson’s and Alzheimer’s disease. We study how neurons, the connections between neurons, and adult neurogenesis contribute to the functions of the nervous system, from the perspective of cell biology.

Investigation of neuronal ultrastructures:
Our understanding of nanometer-scale structures that make up cells remains very limited due to the lack of techniques to observe them. We developed a unique technique to label specific structures of cells under the electron microscope. Combined with a deep learning method-based analysis, we will reveal 3D-ultrastructures of cells, including neurons.

The mechanisms underlying the functions of our brains still remain to be elucidated. Using cutting-edge techniques, we aim to connect the gap between molecules and neural circuits, which helps us understand how our own brains work.