Abstract
Measurements of quantum systems inevitably involve disturbance in various forms. Within the limits imposed by quantum mechanics, there exists an ideal projective measurement that does not introduce a back action on the measured observable, known as a quantum non-demolition (QND) measurement. Here we demonstrate an all-electrical QND measurement of a single electron spin in a gate-defined quantum dot. We entangle the single spin with a two-electron, singlet–triplet ancilla qubit via the exchange interaction and then read out the ancilla in a single shot. This procedure realizes a disturbance-free projective measurement of the single spin at a rate two orders of magnitude faster than its relaxation. The QND nature of the measurement protocol enables enhancement of the overall measurement fidelity by repeating the protocol. We demonstrate a monotonic increase of the fidelity over 100 repetitions against arbitrary input states. Our analysis based on statistical inference is tolerant to the presence of the relaxation and dephasing. We further exemplify the QND character of the measurement by observing spontaneous flips (quantum jumps) of a single electron spin. Combined with the high-fidelity control of spin qubits, these results will allow for various measurement-based quantum state manipulations including quantum error correction protocols. 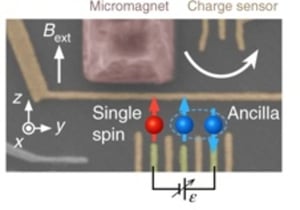