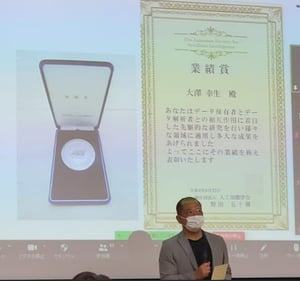 The Japanese Society for Artificial Intelligence (JSAI)
The Japanese Society for Artificial Intelligence (JSAI) awards the JSAI Achievement Award to individuals who have made significant achievements in the science of artificial intelligence or its applications, and to encourage the further development of science and its applications. The award is presented to individuals who are members of the society. The selection method is based on nominations by regular members, officers, etc., and the selection committee (consisting of one chairperson: a predecessor vice president, two secretaries: a director in charge of general affairs, and 21 committee members in total this time) selects the recipients. The criteria for awarding are academic achievements in the field of artificial intelligence or its applications, their contributions and ripple effects, with particular emphasis on originality and usefulness.
This year, just one recipient was selected following this process strictly. The award ceremony was held on June 22 (after the General Meeting of Members), and the recipient was presented with a certificate and a commemorative medal. This is the second recipient of the award at the University of Tokyo and the first in the field of engineering.

About awarded research
Yukio Ohsawa has focused on the interaction between data owners (experts of the target domain) and data analysts (data scientists) in data analysis and has pursued the essence of the process. First, in 1998, he presented the KeyGraph algorithm and applied it to data on earthquakes, business, medicine, etc. He reported that not only the network of co-occurrence but also the peripheral domains extracted from the graph structure by this method induce innovation by experts. This process of discovery came to be named the "chance discovery process" and he further proposed and implemented various concepts in data science. By then deepening the discussion, he found that data analysis itself is an interactive process where data scientists and domain experts join to refine knowledge and value, via the interaction between knowledge and data where data are designed based on the discovery of latent structures of experts' knowledge on visualized latent structures of available data.

In 2013, Ohsawa proposed a process, Innovators' Marketplace on Data Jacket (IMDJ), on which various technologies came to be developed to promote innovation creation by experts. He also extended IMDJ to a multilayered information space where not only single fields but also heterogeneous data are distributed, and is currently conducting an R&D to explain the interactions among data in a creative data marketplace consisting of larger heterogeneous data networks. The methodology in IMDJ was applied not only to business domains, but also to the Cabinet Secretariat's COVID-19 project on epidemic forecasting, where he discovered the principle that the distribution of people, especially "contact with unknown people" is essential information i.e., Stay with Your Community published in 2020. With this achievement, we are now able to make useful recommendations to policy makers about recommendable social life style of people.

In summary, Ohsawa has not only pursued the essence of data-driven innovation and developed various algorithms, but has also applied them to various areas and obtained significantly new and useful results. His consistent research results on the essence of data analysis over a quarter of a century deserve the Achievement Award of the Japanese Society for Artificial Intelligence.

Your impression & future plan
I am truly honored to be the first recipient of this award since 2016 in this academic society, and the second at our university since Dr. Junichi Tsujii of this university, who received the award in 2007. Artificial Intelligence is not synonymous with machine learning, but is a much larger field, and I believe that Japanese artificial intelligence studies are the best in the world in terms of development and fascination to pursue the dream and essence of this vast field. It is a great honor for me to have been chosen over my seniors, contemporaries, and younger colleagues in the field of artificial intelligence.

I would like to continue to share with you the content and direction of development of our research, as simply accepting the award is too limited to benefit human society, which is essentially what engineering is pursuing. I am deeply grateful to the Dean of the Graduate School of Engineering and various other people for their congratulatory speeches at the commemorative lecture by the DFIL Social Cooperation Chair. We hope to continue to contribute to the development of engineering and 3D collaboration (industry-government-academia X international X interdisciplinary) to foster knowledge systems.