The 5th Nagase Prizes are awarded to Lecturer Yasuhide Inokuma

On Sep. 25, 2015, the 5th Nagase special prize was awarded to Yasuhide Inokuma from the Department of Applied Chemistry, The University of Tokyo. The awarding ceremony and memorial lectures were held at Imperial hotel Tokyo with more than 1000 attendees.

The Nagase prizes are awarded annually by the Frontier Salon Foundation to young researchers who have performed outstanding researches for future human society. The prize is named after Mr. Akiyuki Nagase, the Founder of Nagase Brothers Inc., who donated the Frontier Salon Foundation. The winners of the Nagase Prize receive prize money and the opportunity to give memorial lectures for high school students.

Lecturer Inokuma received this award for his outstanding scientific achievements in the field of X-ray crystal structural analysis. 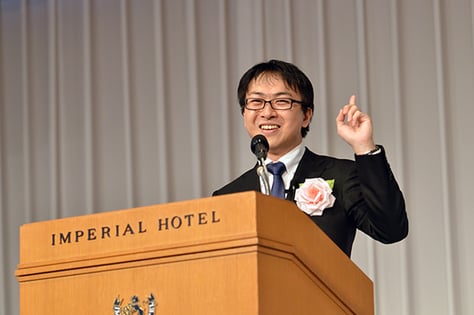