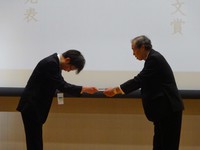 Our study deals with an automation of inspection works of social infrastructures. At present, aging of social infrastructures has become a serious problem. Under such a background, hammering test, a traditional inspection method which can detect defect state of the target from the difference of sounds obtained by hitting it, has attracted attention again. In the awarded paper, we proposed a basic algorithm for online defect detection using hammering sounds. Applying our method to crack detection of an office building, locations of not only the cracks but also inner structure behind wall, such as blank space and metal beams, were detected correctly.

We intend to expand our system so that it can be applied to other social problems, such as concrete tunnel inspection, which is highly demanded.