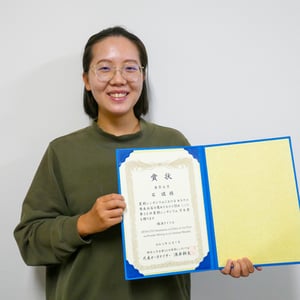 ＜Name of award and short explanation about the award＞
SPTJ Summer Symposium Student Award
It was given for the superior oral presentation by student at this symposium.

＜About awarded research＞
By the in-house code FELMI of Sakai Lab, the air effect on powder mixing is analyzed in a container blender for the first time. The question that when air should be considered during the particle mixing and how the air effects evolve as particle gets smaller is answered by the complete investigation. Under the specific operation condition, the convection mixing characterized by three times’ particle fall-off was identified for no-air case first. Then by comparison study, large particles were found not influenced by air from the point of Lacey’s mixing index. The medium particles suffered from slightly negative impacts by air drag force since the direct falling down in the free space was impeded. The small particles were mostly influenced by the air and were found to be accelerated significantly in mixing. Particles were supported in the blender free space to travel in the air instead of immediately falling, which accounts for the positive air effects. This study illustrates an import concept in practical industrial process that air effects cannot be ignored for tumbling blender when particles are small to some extent.

＜Your impression & future plan＞
It is my great honor to win this award. I would like to express my sincere appreciation to every member in my lab, especially my supervisor Prof. Mikio Sakai. For future, I will try my best and continue the related research.