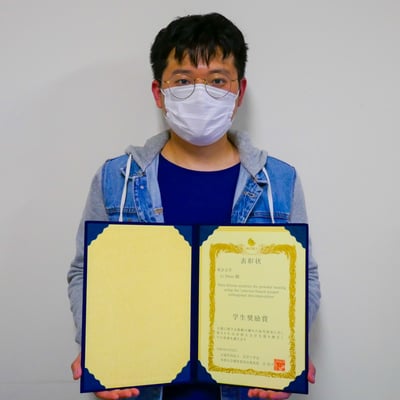 〈Name of award and short explanation about the award〉
Poster Award
It was given for the superior poster by student at this symposium.

〈About awarded research〉
The authors have developed an advanced technique, namely Lanczos-based proper orthogonal decomposition, for the data-driven analysis of mixing mechanism in a rotating paddle mixer. The LPOD can be used to characterize the major features of a powder flow during the mixing process. Firstly, it was verified by the capability of the first several POD modes to reproduce the location histories of a specific particle and the overall mixing index. Second, a series of DEM-CFD simulations in a rotating paddle mixer was conducted, and the mixing mechanisms were identified by the quantitative methods. It was found that in the rotating paddle mixer, the mixing is dominated by the convection in a short term and the diffusion in a long term. Third, the relation between the POD modes and the mixing mechanisms was established: a clumped spatial distribution of POD modes appears in the convective mixing, and a random spatial distribution of POD modes takes place in the diffusive mixing. By using this relation, the LPOD method provided an effective way to identify the dominant mixing mechanism and explain the transition of mixing mechanisms by time effects of convective and diffusive mixing.

〈Your impression & future plan〉
It is my great honor to win this award. I would like to express my sincere appreciation to every member in my lab, especially Dr. Guangtao Duan and my supervisor Prof. Mikio Sakai. For future, I will make my best effort to continue my research about the numerical simulation and advanced technology.