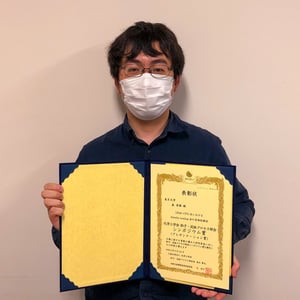 〈Name of award and short explanation about the award〉
Symposium presentation award
It was given for the superior presentation by student at this symposium.

〈 About awarded research〉
Gas-slid flow is one of the important flow in chemical engineering processes such as the fluidized bed. In order to understand the phenomena of the gas-slid flow, numerical analysis using the DEM-CFD method has been widely applied. To apply the DEM-CFD method to complex geometries, we have developed an innovative wall boundary model, namely SDF-IBM, which makes it possible to create arbitrary wall boundary by simple operation. However, the unrealistic fluid penetration was occurred in SDF-IBM modeling because it treats the walls as a kind of fluid. To solve this problem, a density scaling model was developed that adjust the density of the wall, but the effect of this model in the gas-slid flow has not been studied in detail. In addition, the DEM-CFD method has a problem of instability when drag force is high.
In this study, in order to solve the instability caused by the drag force, an implicit method for the drag force was developed. Then, a Flexible Euler-Lagrange Method with an Implicit algorithm (FELMI), which is composed by the implicit method for the drag force and the density scaling method, was developed. In order to verify the accuracy of the FELMI, numerical analysis was performed in a fluidized bed with inserted pipes and the results were compared with the experimental results.

〈Your impression & future plan〉
It is my great honor to win this award. I really thank Prof. Mikio Sakai for his excellent supervision, and I also thank all members of my laboratory. I will keep researching hard and try to improve our researches.