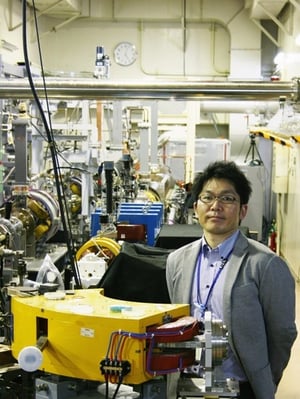 Large fraction of issues in nuclear engineering are closely related to ionizing radiations.  We have worked through “chemical forms of halide ions (Cl−/Br−/I−) in aqueous solutions under radiation environment”, “gas evolution from water radiolysis under boiling conditions”, “water radiolysis at water/metal oxide interfaces”, and so on.  Ionizing radiations are now an essential tool in medicine and industry.  For example, ionizing radiations are used in cancer treatment, diagnosis, material processing, micro-/nano-fabrication, and so on.  We have worked through “initial stages of radiation enhancement/protection by small amount of additives”, “oxidative and reductive radiation damage to DNA”, “water radiolysis with therapeutic high-energy heavy-ion beams”, “fundamental investigation for development of polymer gel dosimeter”, and so on.  Anyhow, it is essential to comprehend details of radiation-induced phenomena in order to minimize bad points of ionizing radiations and to maximize their good points.  We are working to clarify radiation-induced initial dynamics. Not only early physical and physicochemical events occurring from picoseconds (10−12 s) to microseconds (10−6 s) but also chemical and biochemical events occurring after microseconds are in our scope. 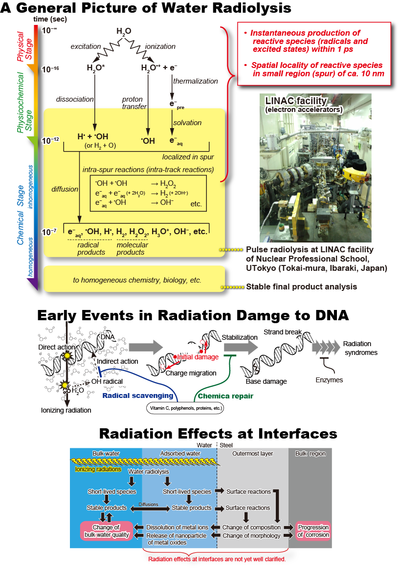 In general, peaks in UV-vis absorption spectra are relatively broad and often some of them overlap with others.  On the other hand, peaks in Raman spectra are much sharper and can give detailed information of vibrational states related to chemical bonds, three-dimensional structure, and so on.  In addition, Raman spectroscopy can be used for non-transparent samples such as dispersion of nanoparticles, suspension, solid-liquid interfaces, etc. while absorption spectroscopy is limited to transparent samples.  Thus, this project is a challenge to pioneer into unexplored filed of “radiation effects at interfaces”.

There is another viewpoint of ionizing radiations.  They are good and ideal sources of radicals (species having unpaired electron(s)).  They can deposit energy to any molecules non-selectively.  Radicals are found not only in radiation-induced phenomena but also in photochemistry, atmospheric chemistry, electrochemistry, burning, explosion, pyrolysis, catalysis, surface reactions, etc.  Ionizing radiations can be regarded as a tool to investigate radicals.  We want to contribute not only to radiation science or nuclear engineering but also to other fields not directly related to ionizing radiations.