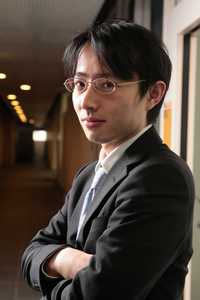 We have conducted the research on Si photonic integrated circuits (PICs) for next-generation computing technologies.
Si large-scale integrated circuits (LSI) have developed dramatically due to the device scaling, which have realized the development of today’s information society. However, the device scaling is approaching the physical limit, and it is concerned that the so-called “Moore’s Law” will come to an end in next ten years. Meanwhile, the rapid development of artificial intelligence makes a demand on further development of computing capability. Hence, next-generation computing technologies, which don’t rely on the device scaling, have been investigated all over the world.
My research group is aiming to develop deep learning based on Si universal PICs. The development of Si photonics technology enables us to fabricate a large-scale PIC on a Si substrate. It is expected to realize ultrafast and ultralow-power deep learning using a Si universal PIC which integrates numerous Si optical switches.
Recently we have successfully demonstrated MOS-based optical phase shifter that is a key-enabler for Si universal PICs (Nature Photonics, vol. 11, no. 8, pp. 486–490, Jul. 2017). By using electrons accumulating at the interface of III-V compound semiconductor, we have achieved efficient, low-loss, low-power optical phase shift. Now, we are developing a deep-learning accelerator using this new phase modulation scheme.

Moore’s Law, which has been going on for more than 50 years, is finally approaching to an end, accelerating various researches on new computing methods. Now we are facing the beginning of the Cambrian period in computer technology, which is an exciting era for researchers. The research on computing based on Si photonic integrated circuits has just started and has a bright future. We would like to challenge new things and contribute to the development of next-generation computing.