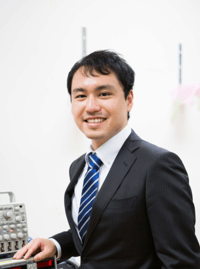 Topological spin textures in materials and their emergent functionality

Stones which draw iron, namely magnets, were discovered long ago in B.C., and have become indispensable elements to support modern society. For example, looking at automobiles packed with state-of-the-art technology, more than 100 magnets are used as parts of devices such as switches, motors, sensors and so on. Despite the old history of the magnet, the magnetism in materials (the mechanism of the magnet) was fully appreciated after the birth of quantum mechanics in the 20th century. Electrons in a material have an angular momentum, that is, spin, which serves as a minute magnet. When these many spins interact with each other and align themselves in parallel, a material becomes a so-called magnet. Surprisingly, magnetism is quantum phenomena that occur at the room temperature!

The spin ensemble shows not only ferromagnetic states aligned in parallel but also various collective structures. Among them, I am focusing on “topological spin arrangements”. Mathematics called topology is a geometry that classifies as having the same shape if two objects can be deformed continuously. As a famous example that comes out as soon as you search on the Internet, there is “Donuts and mugs are deformable and can be classified in the same shape”. This stems from the theorem that a closed surface of a solid can be classified by number of holes and each category is characterized by an integer, that is, the number of holes. In recent years, it has been recognized that the concepts of topology are effective in the condensed matter physics, and various discoveries have been made. As for the topology of the spin structure (magnetic structure), a two-dimensional topological magnetic structure called “skyrmion” has been experimentally demonstrated by a German group and also by our group led by Prof. Tokura. An image shown in Figure is a direct observation of the skyrmions appearing in an intermetallic compound Fe0.5Co0.5Si by the electron microscope [1]. Here we analyze the direction of spin and put a color. (The lower-left color wheel represents the correspondence between color and spin-orientation, for example, the red color on the right of the color wheel represents rightward spin.) Tens of thousands of spins are aligned to form a 90-nm-diameter vortex structure “skyrmion”, and these vortices are packed in a triangular lattice. If you collect all the spins within a skyrmion at one point, you can see that the spin directions cover the sphere exactly once. When the spin covers the spherical surface an integer number of times, the magnetic structure has the topological nature. The mathematical characteristic of the skyrmion’s topology brings unique physical properties through interactions with electrons. Those properties are drawing attention as a promising device functionalities. We are especially interested in a huge effective magnetic field called “emergent magnetic field” generated by skyrmions and have observed various electromagnetic responses which can persist in nanodevices. For example, skyrmions, which can be regarded as individual particles, can be driven and detected with high efficiency by electric current etc. Therefore, they have great possibility to be applied as information bits of next-generation magnetic storage memory with electrical controllability. We also extend the concept of skyrmion lattice to three dimensions; and observe a new topological magnetic structure “the hedgehog lattice”. The hedgehogs behave like the “magnetic monopoles” which are thought to existed at the dawn of the universe [2]. Currently, utilizing the dynamics of these magnetic structures, we are also exploring unique functional properties such as highly-efficiency thermoelectric conversion [3].

The emergent magnetic field, which stems from the topology of the magnetic structure, affects the electrons in an unexpected way, bringing out various undiscovered electromagnetic functions.
At present, humanity has become an era of using electric energy freely. However, with the extremely rapid development of the information society, the amount of electricity consumed by the IT equipment continues to increase, and environmental problems and exhaustion of resources must be addressed seriously. As a researcher of physics engineering which becomes a bridge of fundamental / applied physics, I would like to contribute to the realization of high-efficiency energy conversion devices and ultralow power consumption elements by utilizing and developing the concept of topology in materials.