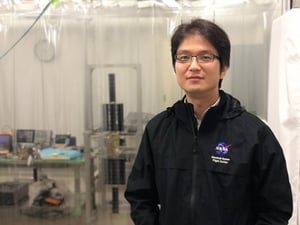 Our solar system is a treasure of unknown frontier. Space agencies around the world have flown unmanned robotic spacecraft and have explored various planets, asteroids, comets and so on. However, as the exploration to be carried out becomes more advanced, the national projects tend to become larger and larger, which makes it difficult to conduct exploration as frequently as we desire.
Our laboratory has applied a state-of-the-art technology such as electronic circuits and devices to the spacecraft and has made it possible to build a small spacecraft (about several 10s of kg) capable of exploring the deep space with much lower cost (about two orders of magnitude lower than the conventional deep space exploration spacecraft). The development of the spacecraft is conducted in our laboratory of the University of Tokyo, and faculty staff and students are working together on R & D to realize an innovative spacecraft that has never been seen before.
In 2014, in collaboration with JAXA (Japan Aerospace Exploration Agency), we succeeded in developing and launching the world's smallest 65 kg probe PROCYON (Note 1, Figure 1). PROCYON successfully flew to the deep space of 60 million kilometers from the Earth and observed the vast hydrogen atmosphere around the Earth (which is called “geocorona”) and also observed the hydrogen emission around the comet (whose name is “67P/Churyumov–Gerasimenko”) from a far distance in deep space, which contributed to the evaluation of water production rate from this comet (Note 3).
Currently, we are developing the spacecraft which is smaller (about 30cm) and lighter (11kg) than PROCYON (Note 4, Fig. 2). The spacecraft, whose name is “EQUULEUS”, will fly to the Moon's Lagrange point (Note 5), and will observe the Earth's magnetosphere, lunar impact flashes (light emission due to the meteorides flying and impacting on the moon surface), etc. EQUULEUS will be launched in 2019 in cooperation with JAXA and NASA.
By enabling deep space exploration to be carried out more frequently and at lower cost in this way, we are expecting further expansion of our knowledge of the solar system and origin of our life. 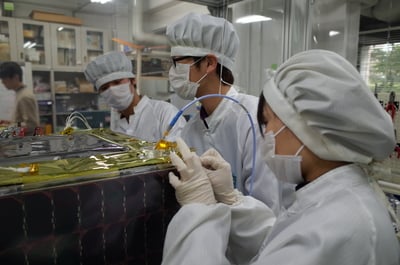 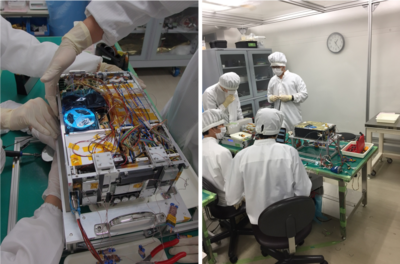 Note 1
We received the Commendation for Science and Technology by the Minister of Education (Research category) in 2017 by our research on the world's first ultra small deep space explorer.
https://www.t.u-tokyo.ac.jp/foe/topics/setnws_20170419173931984058490498.html

Note 5
The place where the gravity of the Earth and the moon balances and thus the spacecraft can keep its position easily. There are five Lagrange points around the Earth-Moon system, of which EQUULEUS will go to the second point (L2 point) located on the back side of the moon as seen from the Earth.

My dream is to realize a world where many spacecraft fly and explore in the solar system (and outside of the solar system in the future), so that their findings will stimulate the curiosity of the people around the world.