First Rio Tinto Australia-Japan Collaboration Program scholar appointed; to be based at The University of Tokyo from this spring

The program, established under the Foundation for Australia-Japan Studies (FAJS), with a grant from Rio Tinto, aims to contribute to strengthening ties between Australia and Japan through collaborative research and other bilateral activities in the areas of science, technology and innovation.
Professor Corbett has held prominent positions in policy advice and consultancy for the Asian Development Bank, OECD, the World Bank and others in the 1990s and 2000s and taught at the University of Oxford from 1982. She is currently an Executive member of the Australia-Japan Business Cooperation Committee and in 2014 received the Japanese Imperial Order of the Rising Sun, Third Class, Gold Rays with Neck Ribbon for contributions to Australia-Japan relations. 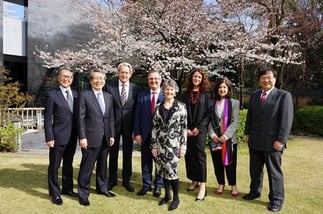