On 20th August 2017, Kazuya Takabatake (PhD student), Department of Nuclear Engineering and Management, won the Symposium Prize for Fluid & Particle Processing Division(Presentation Award) at the The 49th Fall Meeting of The Society of Chemical Engineers, Japan. 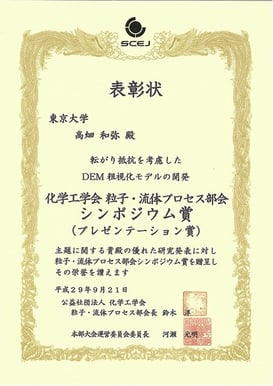 In pharmaceutical and food industries, non-spherical granulated particles whose density is relatively low are frequently used. From a view point of calculation cost, the calculation of a large-scale problem was substantially impossible by using the existing methods. For the quality control and the optimization of industrial process, it was desired to develop a new calculation model of non-spherical particle system which is applicable to a large-scale problem. In this study, we developed a new rolling friction model in DEM. Besides, we coupled the rolling friction model with DEM coarse grain model for a large-scale system. Through some verification tests, the adequacy of our new model and its applicability to DEM coarse grain model were both proved. We succeeded to establish the new calculation model of a large-scale non-spherical particle system.

It's my great pleasure to win this award. I really thank Prof. Mikio Sakai for his excellent supervision, and also all members of my laboratory. I will try to improve our researches.