The Deans' Forum is a strategic response from leading engineering schools to the issues that society is facing in the 21st century.  From discussions in 2010 between the Dean of the School of Engineering, UTokyo and the Head of Research at IBM-Watson about the complex problems that engineering as a discipline has the opportunity to address, and the crucial role that globally leading engineering schools can play now and in the future, the idea of creating a network of several key institutes was born.

Our latest meeting was held on September 21, 2016 hosted by the University of Cambridge, with the participation from MIT, KTH Royal Institute of Technology, the French Grandes Ecoles, the University of Oxford, and UTokyo.  The main discussion topic being University-Industry Collaboration, representatives of the industry (IBM Research, BP, Dyson, Jaguar-Landrover, Rolls-Royce, Scania, East Japan Railway, Hitachi and Toshiba) were also invited to share experiences and participate in the discussions.

The development of sustainable and mutually enriching links between academia and industry has organically become the core topic of the Deans' Forum. Leading engineering schools are uniquely placed to leverage their links with industry, conduct collaborative research that may be beyond the focus of industry alone, and to impact the wider academic arena through symbiotic interactions with industry on issues of engineering education for the 21st century.

The discussions will continue in the next Forum which will be hosted by the French Grandes Ecoles in November 2017.

Participants from the member universities and industry 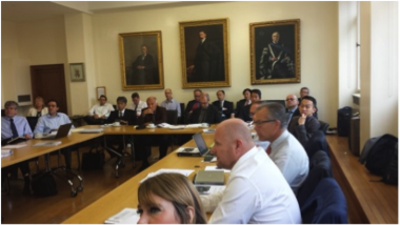