On 7th September 2016, Masahiro Sato, Department of Electrical Engineering and Information Systems, won 2017 Siebel Scholars in Energy Science. The Siebel Scholars Program is a scholarship program founded by the Siebel Scholars Foundation intended for students who are enrolled at any of the number of graduate schools worldwide participating in the program. 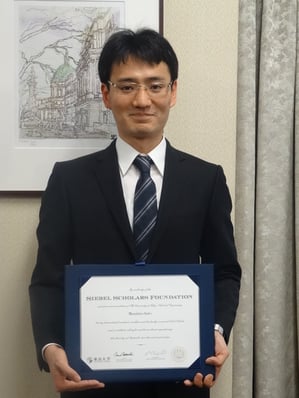 <Comments>
It is a great honor to receive this award. I would like to thank everyone who supported me.
Owing to the paradigm shift of power systems, there is an urgent need for developing high-performance electrical insulators. We will clarify the high electric field phenomena in insulators from first principles, in order to go beyond the empirical Edisonian approach, which has been practiced for more than a century.