When a strong magnetic field is applied to a layered semiconductor device, a current flow emerges without any energy loss at the edge of the sample (edge current). This phenomenon, called “Integer Quantum Hall Effect”, has been actually used as resistance standard and is expected to explore low-power-consumption electronic devices. However, Quantum Hall Effect has a drawback that a strong magnetic field must be applied. Topological insulators are a new class of semiconductor that is insulating in bulk but possesses a conducting metallic surface layer. When topological insulators are doped with magnetic ions, there emerges ferromagnetism. Owing to the novel interaction of the surface metallic states and ferromagnetism, magnetic topological insulators can host the quantum Hall effect in absence of magnetic field. This is called “Quantized Anomalous Hall Effect”, where the edge current emerges without magnetic fields. Since the Quantized Anomalous Hall Effect does not need any magnetic fields, this quantum phenomenon is expected to be applied to the electric devices employing the edge current. 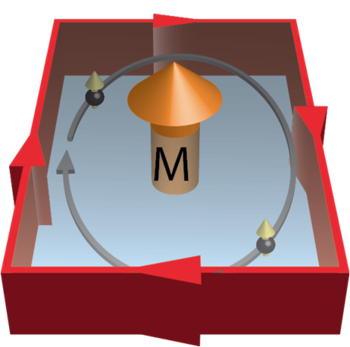