The SPring-8 Angstrom Compact Free Electron Laser (SACLA), located at Harima in Hyogo Prefecture, is an X-ray Free Electron Laser (XFEL) facility that can produce full coherent lasers, making possible the observation of things that until now were beyond our view, such as the inner structure of living cells. The greater the intensity of the XFEL beam, the more information that can be obtained in XFEL applications.

To date SACLA had exploited Japan’s strength in ultra-precision machining by creating a micro-beam using an ultra-high precision mirror, creating the highest intensity X-ray beam yet achieved (6x1017W/cm2). Even at this strength, however, there are phenomena that cannot be observed, but it would require a complicated system to focus the X-ray beam even further to increase its strength.

Cameras and microscopes in common use incorporate multiple lenses and mirrors. This is because by repeatedly magnifying and focusing the light it is possible to improve the size of the light beam and area and resolution of the field of view. However, even if sufficiently high-precision mirrors are produced, it is necessary to control them with great precision in short-wavelength X-ray lasers. As a result, it had not yet been possible to produce a complex X-ray laser incorporating multiple mirrors as in a common camera.

Associate Professor Hidekazu Mimura at Department of Precision Engineering, Graduate School of Engineering, the University of Tokyo and Professor Kazuto Yamauchi at Osaka University, and their colleagues at the Japan Synchrotron Radiation Institute and RIKEN, successfully developed a two-staged reflective focusing system and installed it to SACLA. This system uses four ultraprecise mirrors. The researchers performed focusing XFEL tests and realized a beam size of 30 nanometer height and 55 nanometer width for the first time, achieving an intensity density of 1020W/cm2, currently the most intense value achieved anywhere in the world and more than 100 times more intense than earlier lasers of the same type. 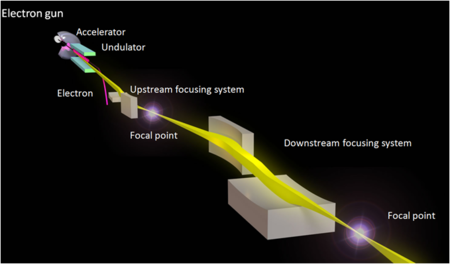