As an extensive study on the development of novel nitrogen fixation systems under ambient reaction conditions, researchers at the University of Tokyo and Kyushu University have recently found another successful example of the catalytic conversion of molecular dinitrogen into ammonia by using dinitrogen-bridged dimolybdenum complex bearing a PNP-type pincer ligand, where up to 23 equiv of ammonia were produced based on the catalyst.   In this paper, they have postulated a reaction pathway for the catalytic conversion of molecular dinitrogen into ammonia, where mononuclear molybdenum-dinitrogen complexes bearing the PNP-type pincer ligand have been considered to work as key reactive intermediates.

To obtain more detailed information on the reaction pathway, they have now newly prepared the mononuclear molybdenum-nitride complexes bearing the PNP-type pincer ligand and examined their catalytic reactivity toward the catalytic formation of ammonia from molecular dinitrogen, because transition metal-nitride complexes are considered to work as key reactive intermediates in the conversion of the coordinated dinitrogen into ammonia.   They have also investigated the density functional theory (DFT) study on the reaction pathway based on the stoichiometric and catalytic reactivities of the newly isolated molybdenum complexes bearing the PNP-type pincer ligand.   The combined experimental and theoretical studies have revealed that the dinitrogen-bridged dimolybdenum core structure plays a crucial role to promote the catalytic reaction in the protonation of the coordinated molecular dinitrogen in the catalytic cycle.   This result is in sharp contrast to their previous proposal, where only mononuclear molybdenum complexes have been proposed to work as key reactive intermediates.

They consider that their new findings described in this paper provide a new opportunity to design and develop novel and more effective formation of ammonia from molecular dinitrogen (nitrogen fixation). 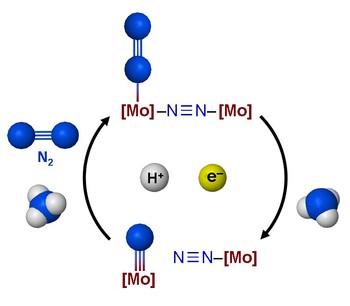