Selective cleavage and formation of covalent bonds, which connect atoms strongly to build up a large molecule, are a modern key technology for the synthesis of complicated organic molecules eventually useful for, e.g., pharmaceutical applications.  If a similar strategy of so-called ‘modular approach’ involving cutting, recombining, and pasting can be applied to noncovalent synthesis, exotic or challenging nanostructures might become achievable.  However, this idea has been considered unrealistic, since selective attenuation and/or enhancement of particular noncovalent forces among many used for nanostructuring are indeed a difficult task.  Without any out-of-box molecular strategy, nanostructures just decompose into constituent small molecules rather than affording their structural modules

The group of Prof. Takuzo Aida, featuring Takahiro Fukino and other coworkers at the University of Tokyo, Graduate School of Engineering, Department of Chemistry and Biotechnology (Deputy Director, Riken CEMS), developed an extraordinary nanoarchitecture that may address this diffucult issue in nanoscale synthesis.  The nanoarchitecture thus developed adopts a tubular shape that can selectively be cut, upon electron ejection (oxidation), into its constituent nanoring modules, which in turn stack up uniaxially on top of each, upon electron re-injection (reduction), to assemble back into the original nanotube.  Since the nanoring is positively charged, it can be pasted onto negatively charged surfaces of other substances.

The new strategy of “cutting, recombining, and pasting at the nanoscale”, demonstrated in the present work, is seminal and expected to contribute greatly to the progress of science and technology of highly complex and functional nanoarchitectures, eventually beneficial for the next-generation electronic devices. 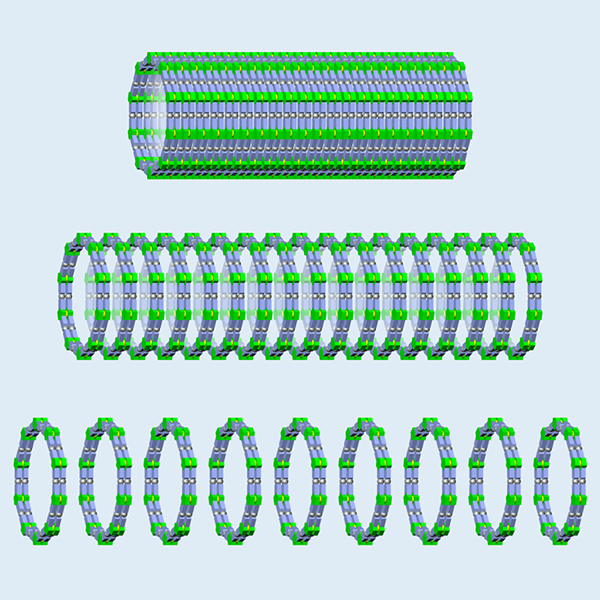 Figure : Schematic illustration of a nanostructure that can be reversibly cut into its constituent modules in response to external stimuli.  An extraordinary nanotube (upper) including ferrocene units has been developed, which can selectively be cut, upon electron ejection (ferrocene oxidation), into its constituent nanoring modules (lower) that in turn stack up uniaxially on top of each, upon electron re-injection (ferrocene reduction), to assemble back into the original nanotube.