Neurological disorders are difficult to cure completely considering poor nerve regeneration capacity. Gene therapy is an important strategy because it is possible to cure the diseased cells by genetically regulating the function, however, conventional gene therapy techniques such as virus vectors and plasmid DNA introduction tend to be difficult in wide clinical applications due to the risk of intentional mutagenesis.
Administering mRNA is a promising approach for treating neurological disorders because mRNA can provide proteins and peptides in their native forms for mature non-dividing neural cells, without the need of entering their nuclei. However, direct mRNA administration into neural tissues in vivo has been challenging due to too unstable manner of mRNA and its strong immunogenicity.
In this study, a research group in The University of Tokyo (Associate Prof. Keiji Itaka and Prof. Kazunori Kataoka in Graduate School of Medicine / Engineering) established a novel carrier based on the self-assembly of polyethylene glycol (PEG)-polyamino acid block copolymer, i.e. polyplex nanomicelles, and applied mRNA for the treatment of sensory nerve disorders. Intranasal administration of mRNA-loaded nanomicelles provided efficient, sustained protein expression for nearly two days in nasal tissues, particularly in the lamina propria which contains olfactory nerve fibers, with effectively regulating the immunogenicity of mRNA. Consequently, once-daily intranasal administration of brain-derived neurotrophic factor (BDNF)-expressing mRNA using polyplex nanomicelles remarkably enhanced the neurological recovery of olfactory function along with repairing the olfactory epithelium to a nearly normal architecture.
To the best of our knowledge, this is the first study to show the therapeutic potential of introducing exogenous mRNA for the treatment of neurological disorders. These results indicate the feasibility and safety of using mRNA, and provide a novel strategy of mRNA-based gene therapy. 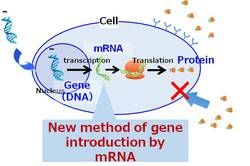